BMW came out of a merger between an airplane maker and an engine maker. Leading up to and during the world wars, BMW made airplanes. Immediately after each war, they were shut down and had to shift to motorcycles first, and then cars.

The roots of the airplane maker side of BMW go back to Gustav Otto, the son of the inventor of the four stroke internal combustion engine and a pioneer aviator in Bavaria in 1910. 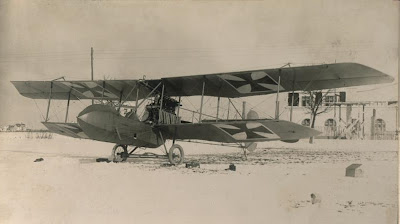 Otto's airplane manufacturing company "Otto Flug Maschinen Fabrik" was plagued with production problems, and was taken over by the German government and then reorganized as Bayerische Flugzeug Werke AG (BFW) in 1916 in the midst of WWI (1914-1918). They managed to solve the quality problems and were a major contributor to the war effort.

The company was hit hard after WWI, as it was forced to shut down airplane production by the allies. To survive, BFW moved into furniture and fitted kitchens using their advanced joinery factories developed to build the wooden aircraft of the time.

had acquired all the shares. At this time it also branched out into designing and building "Flink" and "Helios" brand motorcycles, with the engines supplied by a company called Bayerische Motoren Werke (BMW), for whom Castiglioni was a shareholder. 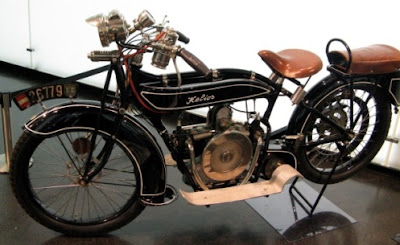 In that same year, Castiglioni bought the rights to the name BMW, its engine designs, and its engine manufacturing capabilities and merged that with his wholly-owned aircraft manufacturing company, BFW, renaming the whole to BMW and moving it to the same buildings as previously occupied by Otto Flugzeug Werke on Lerchenauer Strasse 76, where BMW HQ has been ever since. 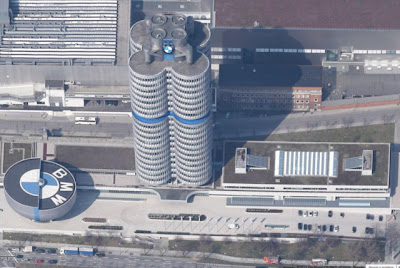 Meanwhile, Rapp Motoren Werke, established in 1913, supplied Otto with his four cylinder aircraft engines. They were also subcontracted by Austro-Daimler to produce their V12 aircraft engines, a deal brokered by Castiglioni. The Austrian sent to oversee the contract, Franz Popp, became actively involved in company management, changed the name of the company to Bayerische Motoren Werke GmbH in 1916, and brought on Max Friz as the chief designer to replace Rapp. Friz designed an excellent aircraft engine, the BMW IIIa. 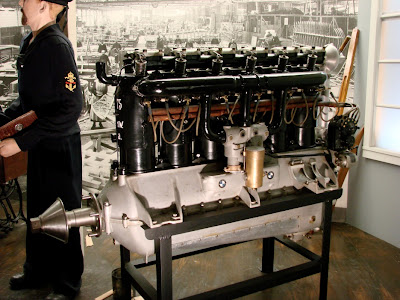 Not willing to continue financing the company itself anymore, The Bavarian and Prussian ministries of war encouraged BMW to be taken public in August of 1918. It was to be one third owned by Bavarian Banks, one third by Bavarian industrialist Fritz Neumeyer, and one third by Castiglioni.

At the end of WWI in November of 1918, BMW was no longer allowed to make aircraft engines by the terms of the armistice, yet the BMW IIIa was its only product. At this time, Castiglioni bought all outstanding shares, the other shareholders having lost confidence in the future of the company.

When allowed to reopen in 1919, under the guidance of Popp and Friz, BWM shifted to motorcycle and boat engines. This alone could not sustain them and Castiglioni maneuvered a contract from Knorr-Bremse of Berlin to manufacture pneumatic railway brakes (having arranged for the Bavarian government to buy their trains in exchange for having the brakes made in Bavaria). The brake building part of the venture quickly overshadowed the engine part of the business. Castiglioni sold BMW to Knorr-Bremse at a considerable profit. Under Knorr-Bremse, the company rapidly grew.

In 1922, Castiglioni offered to buy back BMW's engine-building business (including Popp as GM, Friz as Chief Designer, and all their engine-related intellectual property), and all rights to the BMW name from Knorr-Bremse, who agreed, being only interested in trains, not airplanes. This company was merged into Castiglioni's other company, Bayerische Flugzeug Werke in 1922, under the BMW name.

In the early 1920's, the modestly sized BMW Company produced motorcycles, small engines, and spare parts, and did not do very well, having not gotten back into the airplane building business since the end of WWI. However, Castiglioni had bought BMW back from Knorr-Bremse for a reason, and had in his back pocket a deal with the Czech government for the BMW IIIa and IV aircraft engines to be manufactured under license by the Walter Company of Prague. The considerable proceeds of the licensing deal went straight into Castiglioni's pocket through unscrupulous accounting practices. Consummating this deal was his true goal in acquiring back the engine division from Knorr-Bremse.

But Castiglioni was not done yet. Soon after this deal, in 1923, BMW began again producing aircraft engines, and won a major contract with the Russian Red Army brokered by Castiglioni. An illicit 10% commission on each engine sold went back into Castiglioni's pocket though shadow companies.

In 1926, Castiglioni ran into unrelated financial problems with Deutsche Bank, and had to relinquish some shares in BMW. As part owner, he was then investigated by the bank for his shady business dealings, and got into further financial difficulty, and was forced to pay back BMW for the illicit commissions which resulted in all his shares going to Deutsche Bank. The Soviets argued they had been overcharged the illicit 10% and settled for a perpetual license to the BMW VI engine design, and then ceased doing business with BMW by 1931.

As the writing was on the wall, under Popp's leadership BMW diversified into motorcycles and then cars in 1928. The Dixi Company of Eisenach licensed the British Austin Seven and began selling it in 1927. In 1928, BMW bought the Dixi Company and renamed the car to be the BMW Dixi, and then the BMW 3/15. 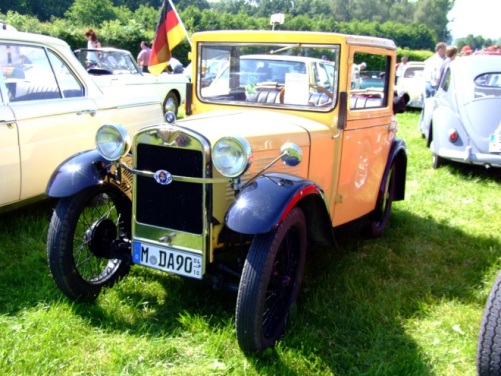 Wishing to wean themselves from the Austin license that was set to expire in 1932, BMW began designing and producing its own cars in 1933, with the BMW 3/20. 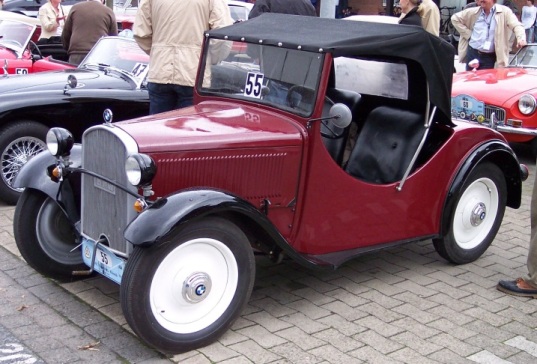 The successor, the BMW 303 produced in 1933, was the first BMW to sport the iconic "kidney grill" that continues to be used as a BMW design cue today.

A number of cars and motorcycles were built up to and into WWII. During the war, BWM was increasingly pressured to exclusively build aircraft engines for the Nazi's, which Popp thought a bad business to be so tied to the Nazis. By the end of the war, BMW was forced to use concentration camp labour to build jet and aircraft engines.

After the war, the company was again shut down and only emerged with its first post-war automobile in 1952. Meanwhile, an English company, Bristol, took plans for BMW's cars as war reparations, and started building Bristol Cars which were knockoffs of BMW's. BMW also had its car manufacturing in Eisenach, which was in Soviet territory. The Soviets used the plans, machinery, factories, and workforce to manufacture "BMWs" for state officials. Later on they even started exporting the cars under the BMW marque to try to get hard currency. BMW's first post-war car was the BMW 501, a luxury car costing 4x the average annual salary (in today's terms, $200,000). 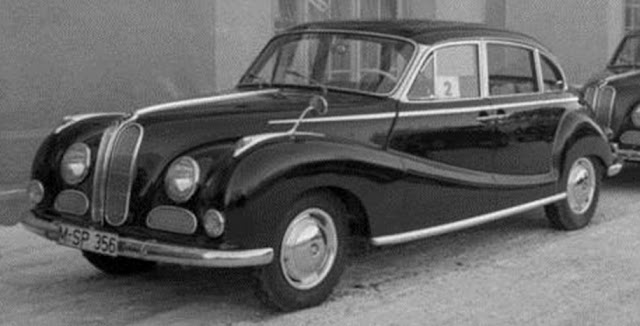 These cars and the likes of the acclaimed sports car, the BMW 507 (below) were too expensive to produce, and were not commercial successes. 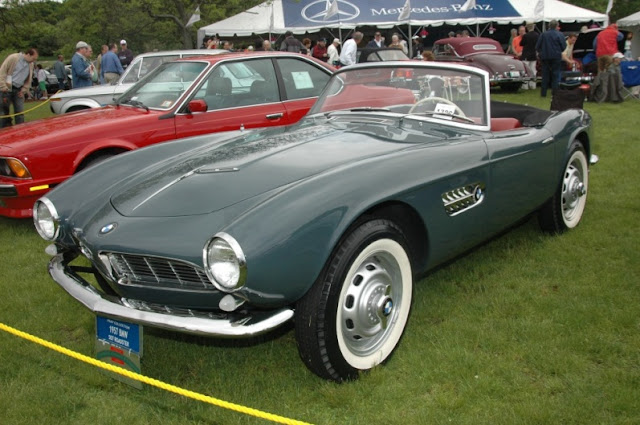 The company was saved in 1955 by the tiny and affordable bubble car, the Isetta, of Italian design, which married BMW's motorcycle and automobile work. 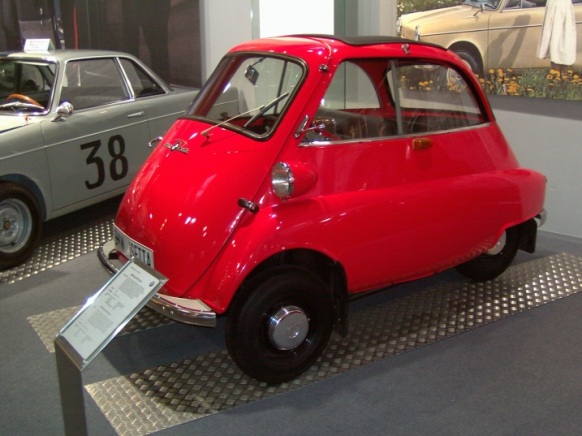 This car was popular with city dwellers, and in 1957 BMW tried to expand on the appeal of the Isetta with the unusual BMW 600. 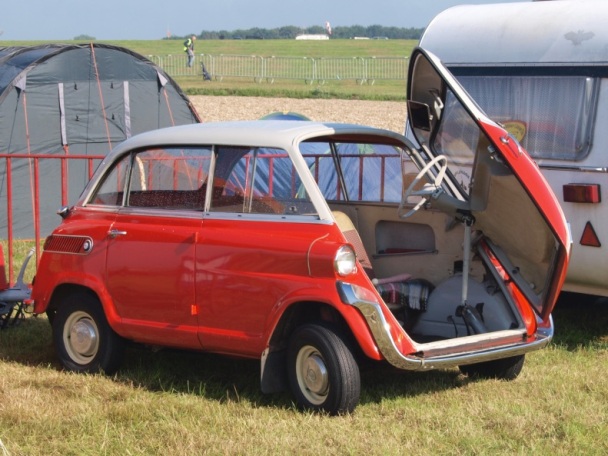 This car was not a commercial success, but it did lay the engineering groundwork for the popular 1959 BMW 700 economy car whose success saved the company from being acquired. 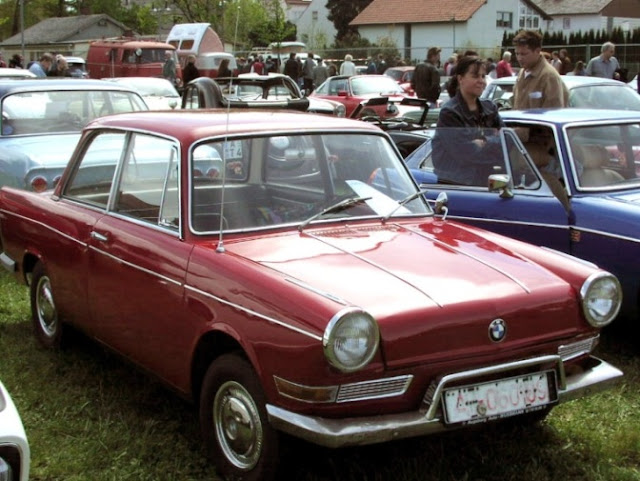 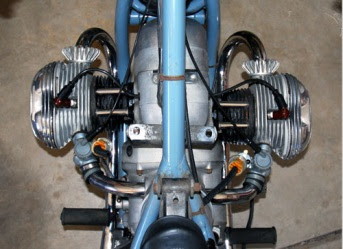 The financial success of the 700 made up for the expensive money losing 500 series cars, but the company was still in trouble. In a famous shareholders meeting in 1959 management stressed that the 700 and their next development, the "New Class", would lead to success. Another faction wanted to essentially sell to Mercedes. In the end, a wealthy German, Herbert Quandt, acquired shares from a disgruntled shareholder and blocked the sale of the company to Mercedes. The Quandts remain as the most important shareholder to this day.

With the new leadership at the Board, BMW was able to pursue the development of the New Class, starting with the BMW 1500 in 1962. 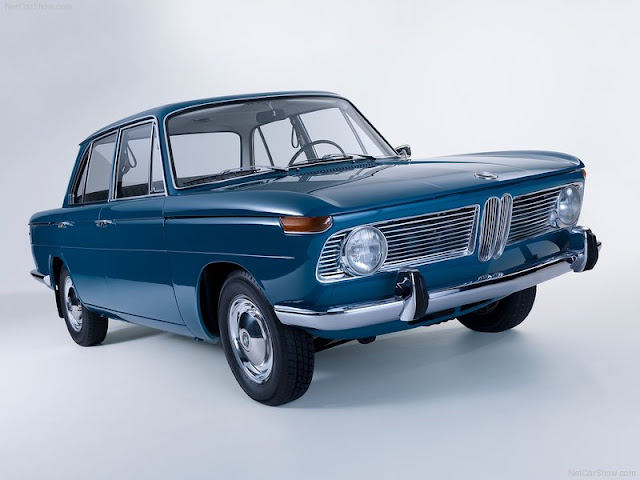 The new class cars used the BMW M10 engine line in production from 1962 until 1988. In its original form it was an inline 4 cylinder single overhead camshaft engine designed by former race car driver Baron Alex von Falkenhausen, displacing 1.5L and producing 80HP. In the 1500 it went from 0-60mph in 15s.

The New Class was a commercial success and established BMW as a maker of sporty, upper scale automobiles.

In 1970, Eberhard von Kuenheim was installed by the Quandts as the top manager within BMW, a position he held for nearly 25 years. von Kuenheim is credited with the idea of the "3-5-7", "small-medium-large", basic model lines which continue to exist today. 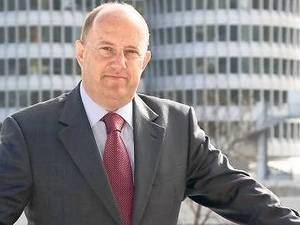 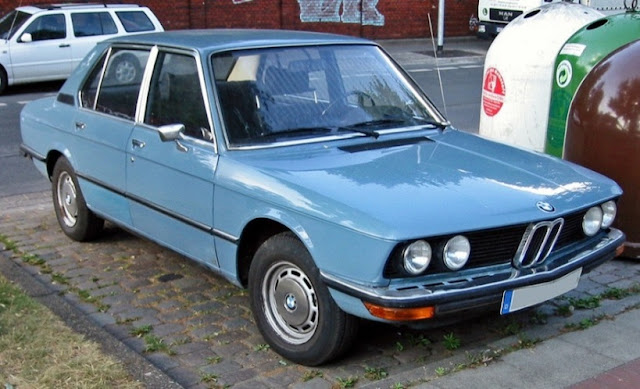 The car was sold in various trims using inline 4 and inline 6 cylinder engines. 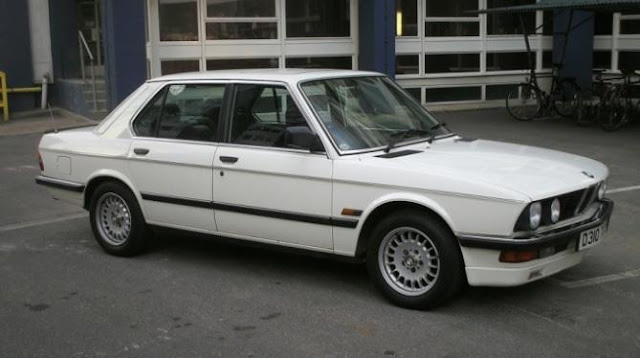 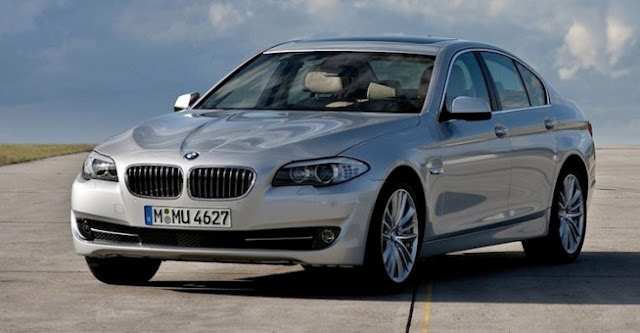 Posted by DapperDan at Saturday, February 23, 2013